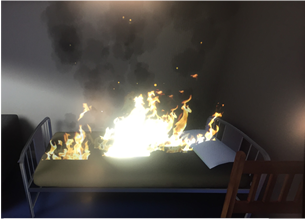 This Proof of Concept project examined the value of a virtual reality environment, which assesses the predisposition people may have for inappropriate firesetting behaviour. It identified whether the technology could be usefully deployed for this form of assessment, and also identified some features of the technology which could be developed to improve the assessment, including: quality of graphics and improved quality of the virtual environment.

Some of the objectives of this project were:

The project aimed to understand how participants experience the virtual reality fire relative to other less immersive methods of assessing inappropriate fire interest.

The project used a virtual reality environment to assess the value of this form of technology for assessing the predisposition of individuals for inappropriate interests in fire setting. To compare the information, the project also used a sample survey.

The virtual reality environment was constructed within the School of Psychology at the University of Kent and delivered using a HTC VIVE VR Headset.

Prof. Theresa Gannon from the University of Kent, focuses one of her main research interests in the area of arson or firesetting. Over the past few years Prof. Theresa Gannon has developed two empirically based standardised treatment programmes for offenders who have set fires: The Firesetting Intervention Programme for Prisoners (FIPP) and the Firesetting Intervention Programme for Mentally Disordered Offenders (FIP-MO). The FIPP has been run in South East prisons and the results of this programme are currently being evaluated. The FIP-MO is being run nationally across the UK within private hospitals and the NHS.

Other academics working within the project include Dr. Emma Barrowcliffe who has an established research interest in firesetting behaviour, and John Allen, Experimental Officer, both from the University of Kent, who provided specialist technical support on the VR development for Psychology. 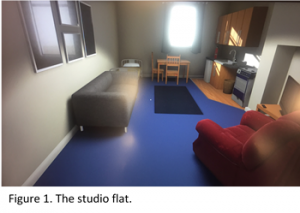 The project has been successful in showing the viability of VR for the assessment of predisposition to inappropriate fire setting.

In collaboration with Maidstone Hospital staff, the project is now trialling with 10 NHS patients. The research into the viability of this form of assessment provides important opportunities for improved clinical interventions, helping patients and ultimately improving the wider wellbeing of the community at large.

Adam Blackwood, EIRA Knowledge Exchange Fellow for Digital Creative at the University of Kent, participated in the data sample trial which took place in the School of Psychology.

He described his experience with virtual reality and the set up within the room that participants saw via the head set as “a room with some basic furniture”, with “items to play with such as a fire extinguisher, matches, magazine and a bed.”

Adam suggested that being within this scenario allowed participants to act in a way they ordinarily wouldn’t:

“There might be a part of you, that is interested in just doing all the things you cannot normally do in a Real World, set light to the bed, burn the magazine.” And that he “could see that the environment was trying to assess interest in wanting to do those tasks.”

Don Shaw-Case, EIRA Knowledge Exchange Lead for the Artificial Intelligence theme at the University of Kent was also a participant in the study. He recounts his experience here:

“The experience was very immersive and I did feel a sense of danger when the fire appeared, and the sound and images were convincing. The only two elements missing was heat and the smell, which I commented on in my end of session debrief.

Overall my experience was very positive, I could see that the simulation could illicit a naturalistic behavioural response, given the visual and auditory stimuli and the 3D visuals did give a sense of space.”

The simplified virtual reality environment used in the EIRA project can potentially be upgraded to increase the immersiveness of the VR experience.  This is a potential area for development. It is also likely that the trials will also be extended depending on the outcomes from live test data.

The EIRA funding has enabled the project to be completed with good effective outcomes. The project has been successful in facilitating the development of a VR fire setting assessment tool which could be further assessed within the NHS.  Further project work has now moved forward to delivering a study at Maidstone Hospital with ten patients.